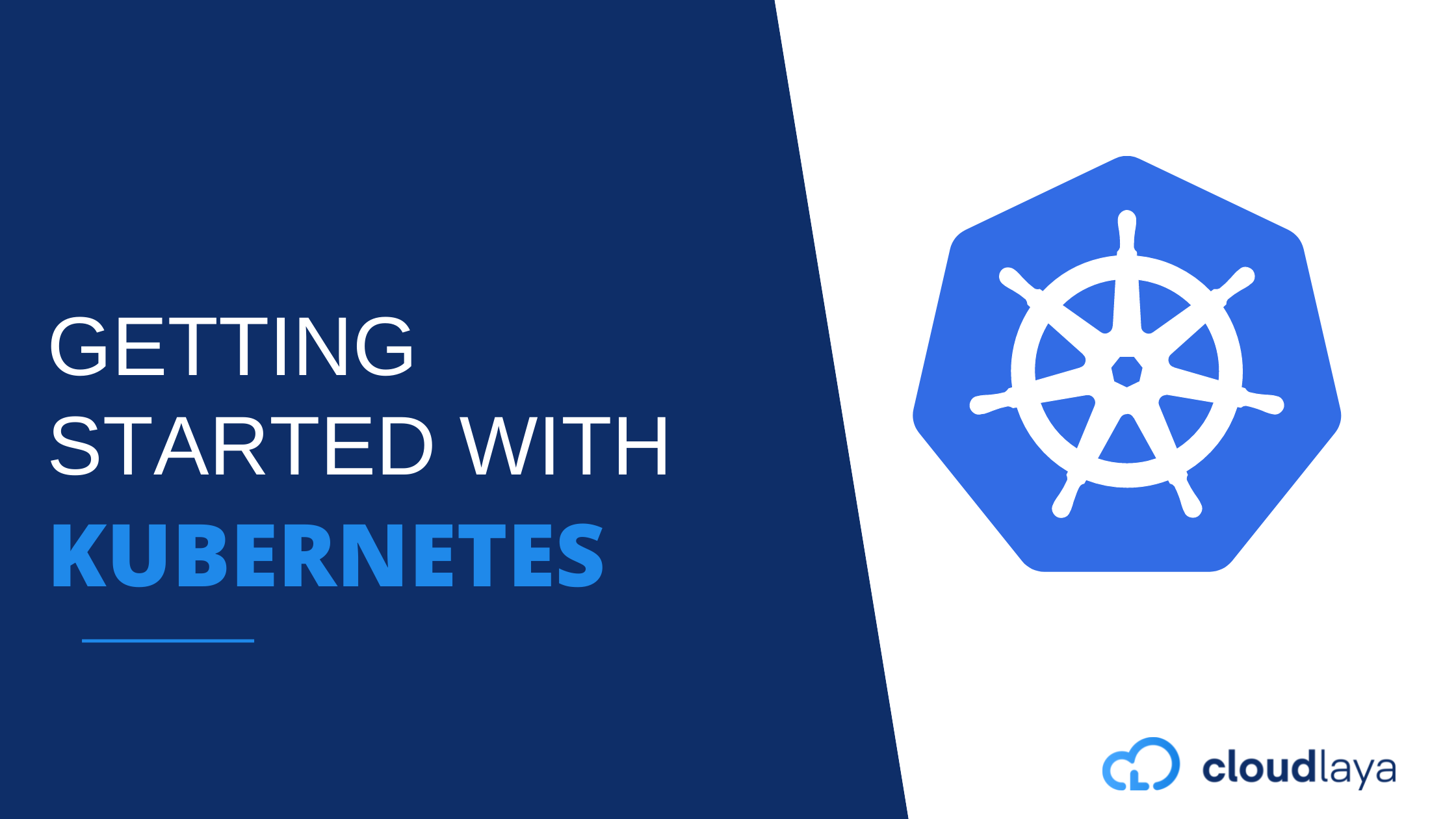 What is Kubernetes and How to Get Started?

Kubernetes is an Open Source Orchestration system for Docker containers. Kubernetes is implemented by Google. It is a platform that eliminates the manual processes involved in deploying containerized applications. Kubernetes are used to manage the State of Containers.

Why are Orchestration tools needed?

Kubernetes helps in automating the manual tasks, following can be an issue if orchestrating tools are not used: 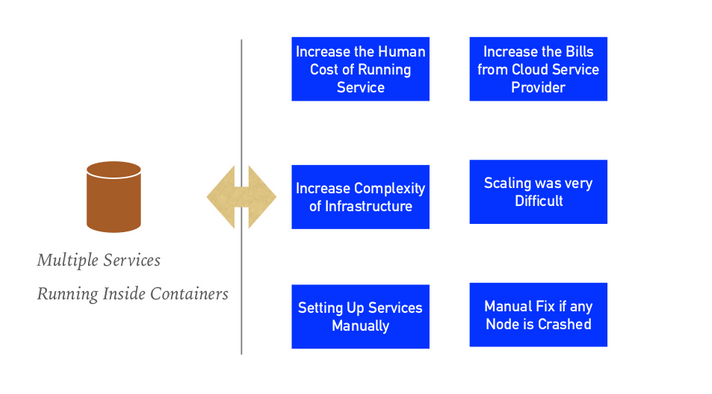 Kubernetes provides advanced schedulers to launch containers on cluster nodes based on their resource requirements and other constraints.

Kubernetes can replace and reschedule containers when nodes die. Kubernetes doesn’t allow Containers to be used until they get ready.

Kubernetes rolls out changes to the application or its configuration. Monitoring Application ensures that Kubernetes doesn’t kill all Instances at that time. If something goes wrong, with Kubernetes you can roll back the change.

Kubernetes can scale up and scale down the application as per the requirements with a simple command, using a UI, or automatically based on CPU usage.

With Kubernetes, you can mount the storage system of your choice. You can either opt for local storage or choose a public cloud provider.

Kubernetes can help you deploy and update secrets and application configuration without rebuilding your image and without exposing secrets in your stack configuration.

You can Run Kubernetes Anywhere 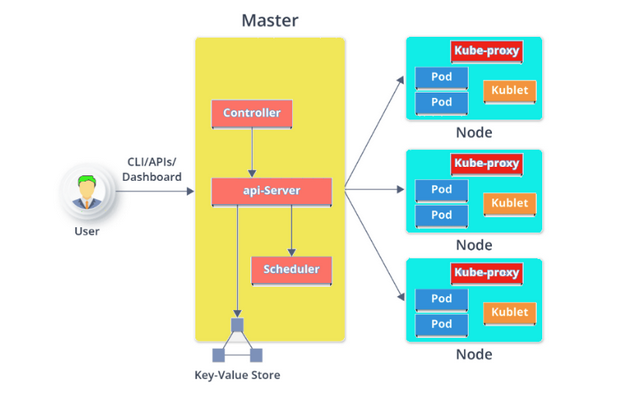 The master node is the Entry Point for All Administrative Tasks. Multiple Masters can be possible. In the Multi-Master Node System, single master nodes will be commanding Node for their own workers and other Masters too. Main Master Node uses ETCD to manage the Workers and Other Master Nodes.

The API server is the entry point for all the REST commands used to control the cluster. The resulting state of the cluster is stored in the distributed key-value store.

Regulates the tasks on slave nodes. It stores the resource usage information for each slave node. Schedules the work in the form of Pods and Services.

Distributed key-value store which stores the cluster state. Can be part of the Kubernetes Master, or, it can be configured externally. It’s mainly used for shared configuration and service discovery.

It’s a physical server or you can say a VM which runs the applications using Pods. Worker nodes contain all the necessary services to manage the networking between the containers, communicate with the master node, and assign resources to the scheduled containers.

It is an agent which communicates with the Master node and executes on nodes or the worker nodes. Kubelet gets the configuration of a Pod from the API server and ensures that the described containers are up and running.

Is a group of one or more containers with shared storage/network, and a specification for how to run the containers. Pods run on nodes and run together as a logical unit. It shares the Same Shared content and same IP but reaches other Pods via LocalHost. Single Pod can run on Multiple Machines and Single Machine can run Multiple Pods.

Kube-proxy runs on each node to deal with individual host subnetting and ensure that the services are available to external parties. Kube-proxy acts as a network proxy and a load balancer for a service on a single worker node. It is the network proxy that runs on each worker node and listens to the API server for each Service endpoint creation/deletion.

Minikube is used to run Kubernetes locally. The MiniKube runs a single-node Kubernetes cluster inside the Linux VMs. Since it’s a single node cluster, we will not use it in production servers.

To install MiniKube on an Ubuntu machine, first, check your target platform and download the binary image. Minikube is a perfect tool for the development environment however it’s not the recommended service for the production server, we will need to use KOPS services from AWS.

Furthermore, we are using a Docker container to run the MiniKube.

Head over to the link for the official documentation on MiniKube. Here are the system requirements to host Minkube.

Now, you can start the MiniKube container.

To check the configured services:

The structure of the demo projects looks like, we have MongoDB and the web application attached to the database. Finally, we will deploy and test the application externally from the web browser. 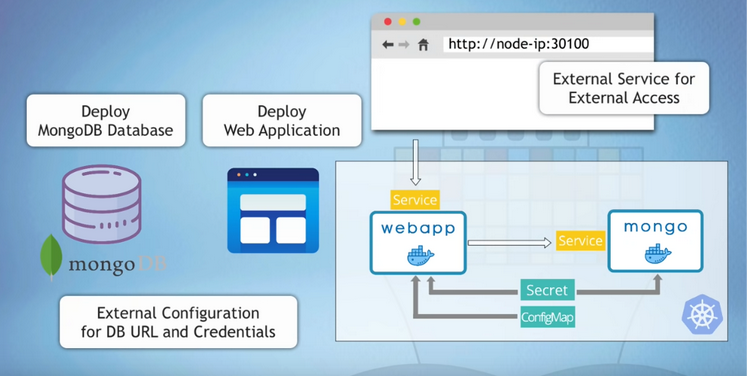 Things needed to get started:

The K8s components include the following 4 files: 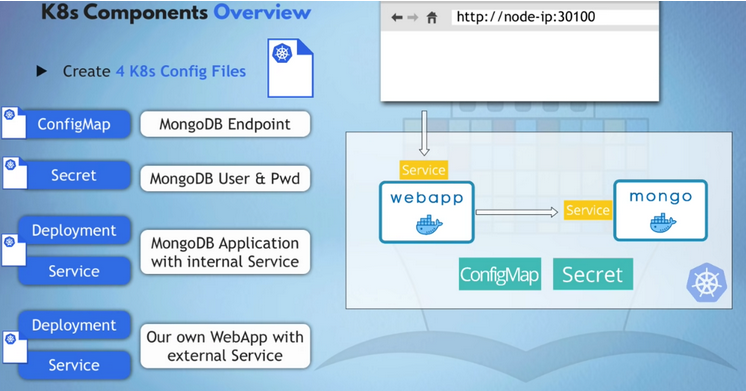 For the file configuration, we can use the Kubernetes official documentation and there search for the required files and services: https://kubernetes.io/docs

On the mongo-secret file, you can see the mongo-user and mongo-password sort of encoding. While using the mongo credentials in YAML, we cannot pass the plain text, we need to encode it with base64.

Now we can use these parameters anywhere in deployment and service files.

This file contains the deployment and the service codes.

Here, we are referencing the mongo image of version 5.0 from https://hub.docker.com/_/mongo

Also, the port, MongoDB runs at the port, thus we need to configure accordingly. Also, the pods mean the number of replicas we want in our deployment.

The web app YAML file contains the image from the docker hub, it’s basically the docker image we created out of our application. Our app is located at:  https://hub.docker.com/r/nanajanashia/k8s-demo-app/tags

The container is of the node js application that starts at port: 3000 thus mentioning the port in our web app file.

Now we have all the setup of the required files to create a Kubernetes cluster.

Step 1: Make sure the MiniKube cluster is running.

Step 2: First we need to create an external configuration with file mongo-config since all other deployment and services files depend upon these. Further, run other commands as follows:

Test to ensure the version you installed is up-to-date:

We can verify the running services with the following commands: During the process, if you get into any error, you can simply get the logs with the command.

As the final step, we need to make sure our application is working on the webserver. 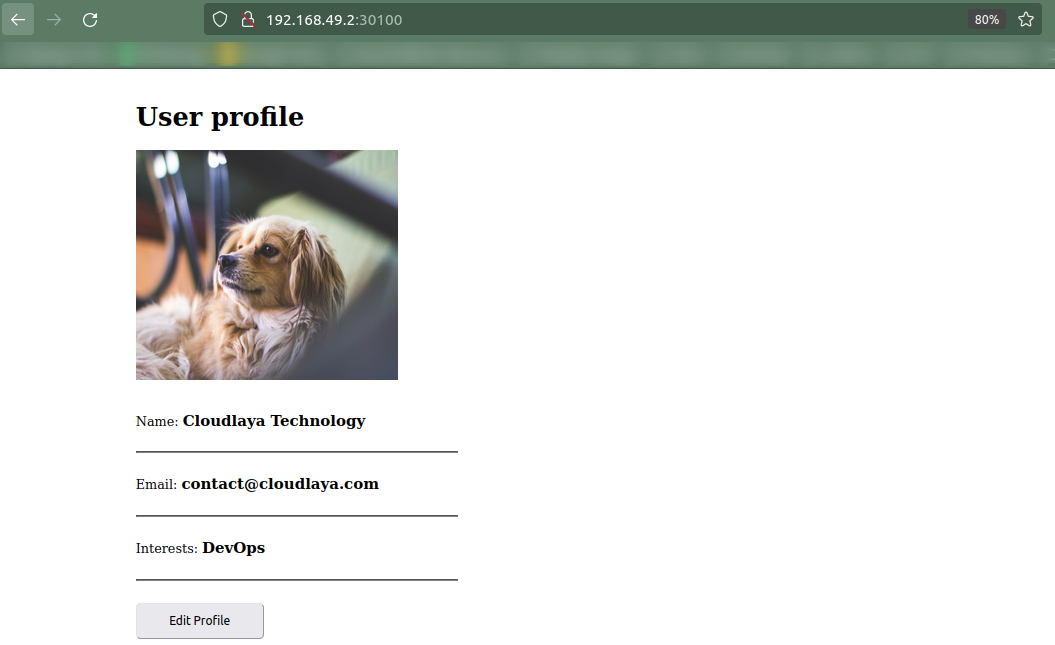 Kubernetes is an aspiring tool used in CI/CD pipeline. It provides a mechanism for the deployment, maintenance, and scalability of an application. On the other hand, Cloudlaya has been providing a continuous stream of value for multiple enterprises while practicing the best DevOps architecture. We start with understanding your company’s cloud needs. Then, we suggest ideal cloud solutions and products that seamlessly work together. Rest assured, with us, you will get high returns on your technology investment. 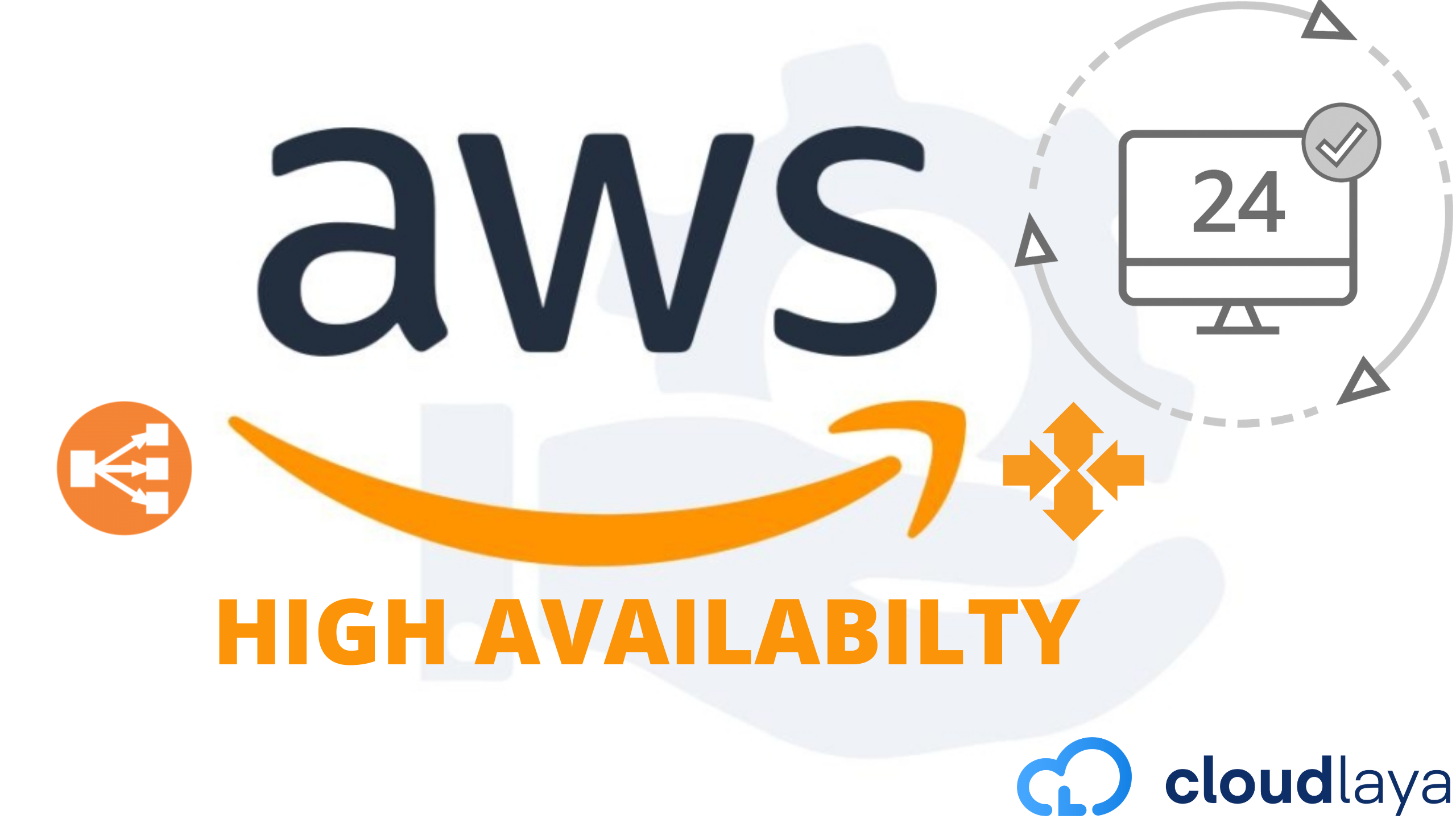 In this post, we'll go through the definition of High Availability and how to quantify it in IT systems. We'll... This article shows how to deploy a full-fledged Django website to an AWS Elastic Beanstalk Python environment and then integrate... 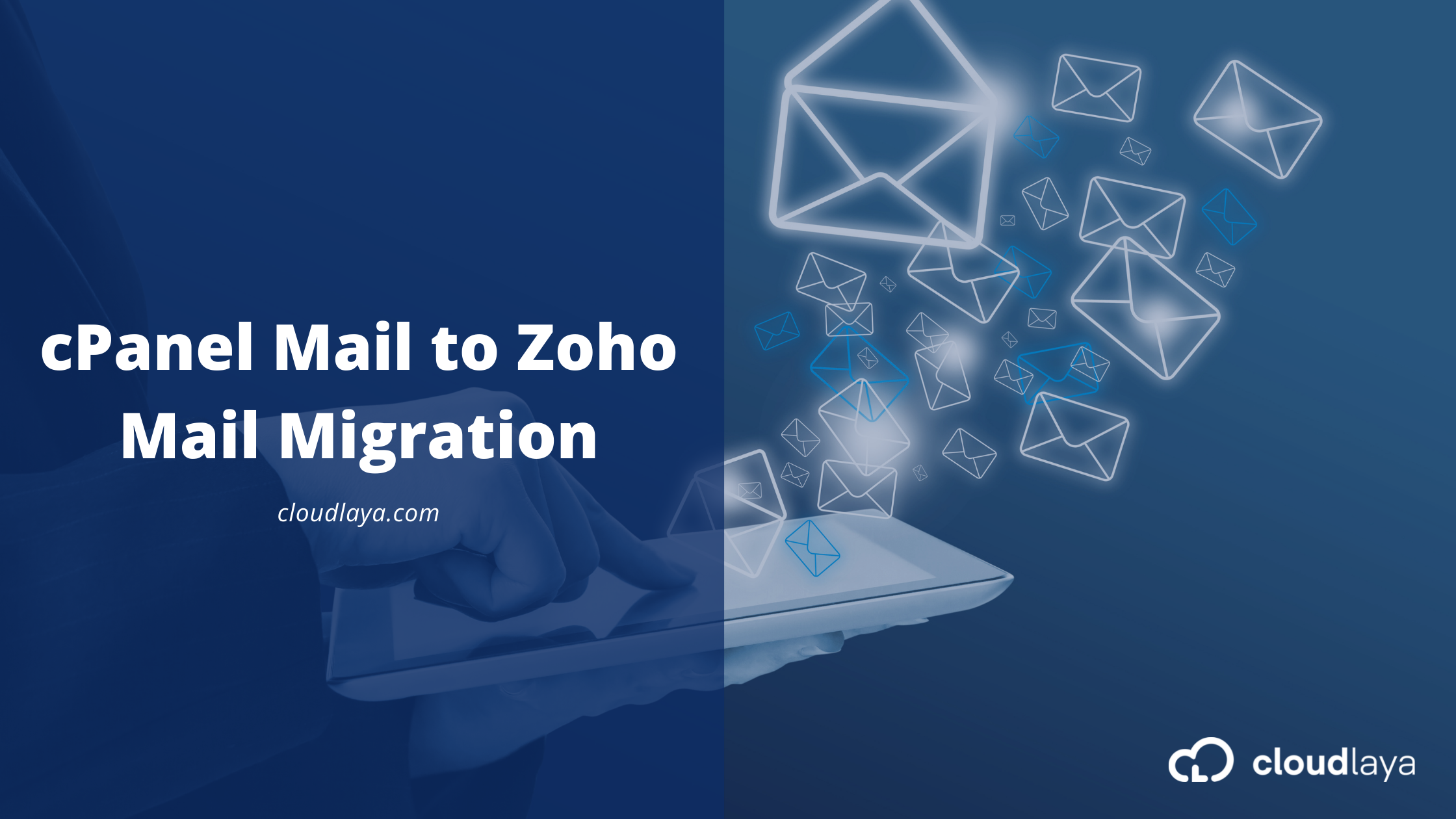 Undoubtedly, email is an important communication and marketing tool for individuals and businesses. In 2022, the number of email users...